Located 5km north of the heart of Kuala Lumpur, Sentul is a juxtaposition of pre-war buildings with their old-world charm and futuristic skyscrapers that punctuate the skyline.

Steeped in history, the former railway hub went through a period of decline before YTL Land & Development took over the 294-acre Sentul Raya development from Taiping Consolidated Bhd and unveiled the Sentul Masterplan — comprising Sentul East and Sentul West — in 2002, which turned the place around.

Fast forward to today, Sentul is especially well-known for the Kuala Lumpur Performing Arts Centre (klpac), which opened in 2005, and the Sentul Depot event space, which was officially opened by YTL Land in 2018. The area is also fast becoming a desired address to live in with iconic condominiums such as The Capers and The Fennel in Sentul East, and the upmarket The Maple condominium, which is situated in a park.

Nawawi Tie Leung Real Estate Consultants Sdn Bhd managing director Eddy Wong notes that the Sentul neighbourhood today looks very different from some 20 years ago. “The Sentul skyline now boasts iconic high-rises of 40 to 50 storeys and the prices of condos [in the area] have more than doubled from five to 10 years ago, reflecting its increased appeal and demand.”

According to him, Sentul’s close proximity to the city centre further boosts its appeal, and infrastructure improvements — the completion of the DUKE Highway and the LRT Sentul and Sentul Timur stations as well as the soon-to-be-completed MRT Sentul Barat station that is part of the MRT Putrajaya Line (formerly known as the Sungai ­Buloh-Serdang-Putrajaya Line) — will enhance the area’s connectivity.

Henry Butcher Real Estate Sdn Bhd chief operating officer Tang Chee Meng says the revitalisation of the whole area has enhanced the living environment and its image and increased its desirability as a place for people to call home. “The unique architecture of The Capers and The Fennel, which have changed the skyline of Sentul, and the presence of the klpac and the 35-acre private and gated Sentul Park, have also added to Sentul’s allure,” Tang remarks. Sentul Park is part of YTL Land’s masterplan development and was carved out of an existing golf course.

In addition to YTL Land’s Sentul Masterplan development, Tang notes that Melati Ehsan’s Bandar Sentul Utama (initially developed by Sentul Murni Sdn Bhd) has also contributed to the growth and gentrification of Sentul as a whole.

According to Tang, the property market in Sentul over the last 10 years can be described as active and supported by strong demand. “A number of high-end condos as well as commercial developments were launched during this period, including The Capers, The Fennel, d6 and d7 offices in Sentul East by YTL Land, as well as Bayu Sentul condo by Melati Ehsan,” he says.

Metro REC Sdn Bhd’s senior real estate negotiator Vetri Kumar notes that Sentul has one of the highest volumes of property transactions within the Klang Valley. “The property market in Sentul has improved dramatically and grown exponentially over the last decade. Due to its strategic location,  demand for developments in the area has increased steadily as Sentul is one of the few suburban areas in KL that have many entry and exit points to major roads and highways,” he says. 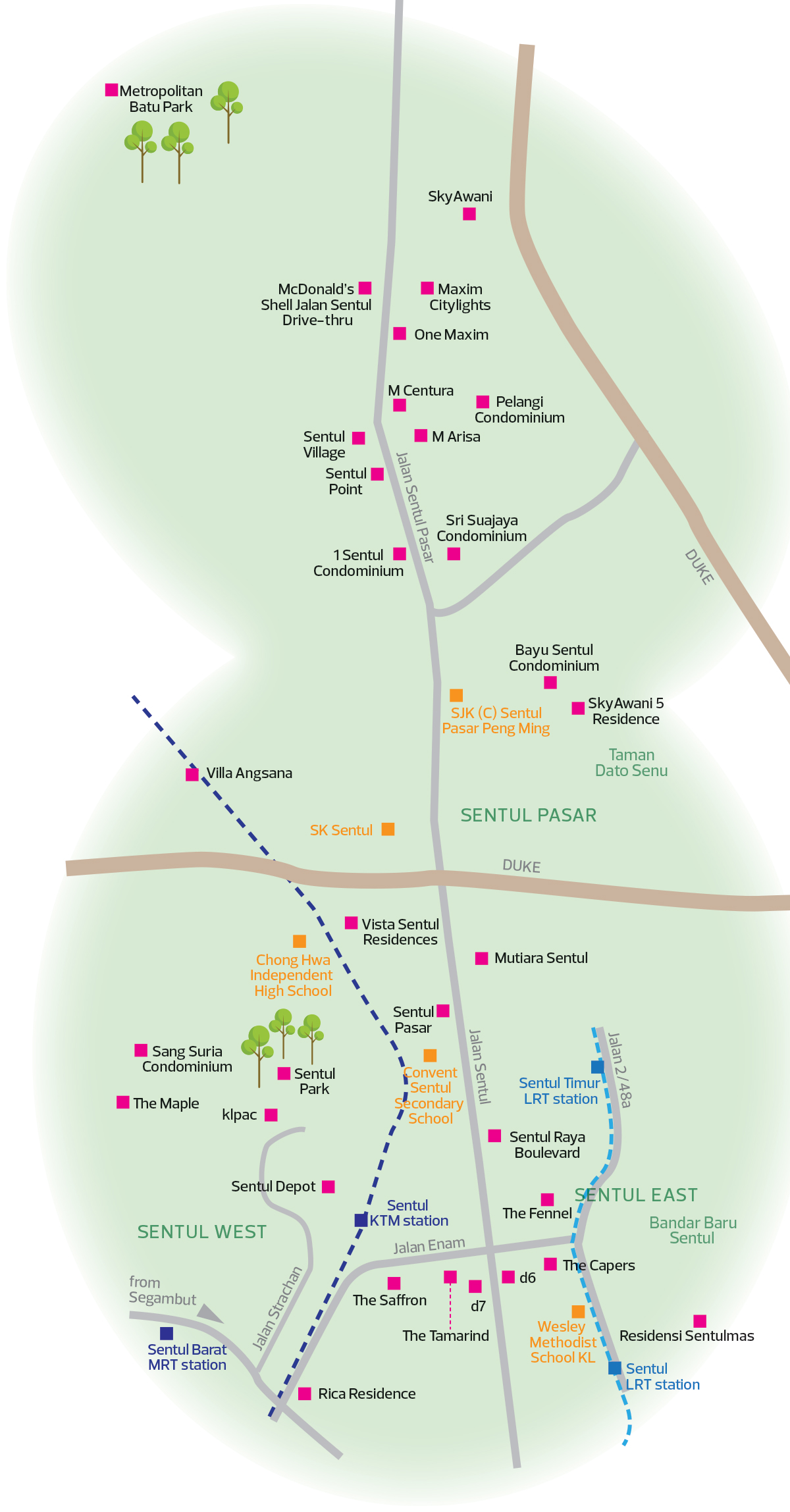 Property prices in the area, Vetri notes, have steadily gone up over the years. “One such example is Maple Condominium, where units are currently typically priced at RM1 million from RM900,000 in 2013. Its price per sq ft has grown from about RM550 to RM700 over the past six years.” Vetri believes the number of developments in Sentul will continue to grow and the area will have good opportunities for both homebuyers and investors.

Sentul’s appeal has attracted many property players to the area and there are a growing number of new developments. Ongoing projects include SkyAwani 5 Residence by SkyWorld Development, One Maxim by Maxim Holdings, Sentul Point by UOA Group, Vista Sentul by Platinum Victory, Rica Residence Sentul by Fajarbaru Builder Group, M Centura and M Arisa by Mah Sing Group and Sentul Works by YTL Land.

Projects in the pipeline, Tang says, include the d2 and d5 commercial developments, which will be undertaken by YTL Land in Sentul East.

According to Vetri, UOA Group is planning to have another lifestyle-related project opposite its Sentul Point development. “Both developments will be linked by an overhead bridge across Jalan Sentul to become one sizeable integrated development over the next few years,” he says.

Platinum Victory’s Vista Sentul, Wong notes, comprises two blocks with a total of 705 units with prices starting from RM329,800 and built-ups ranging from 689 to 1,216 sq ft. 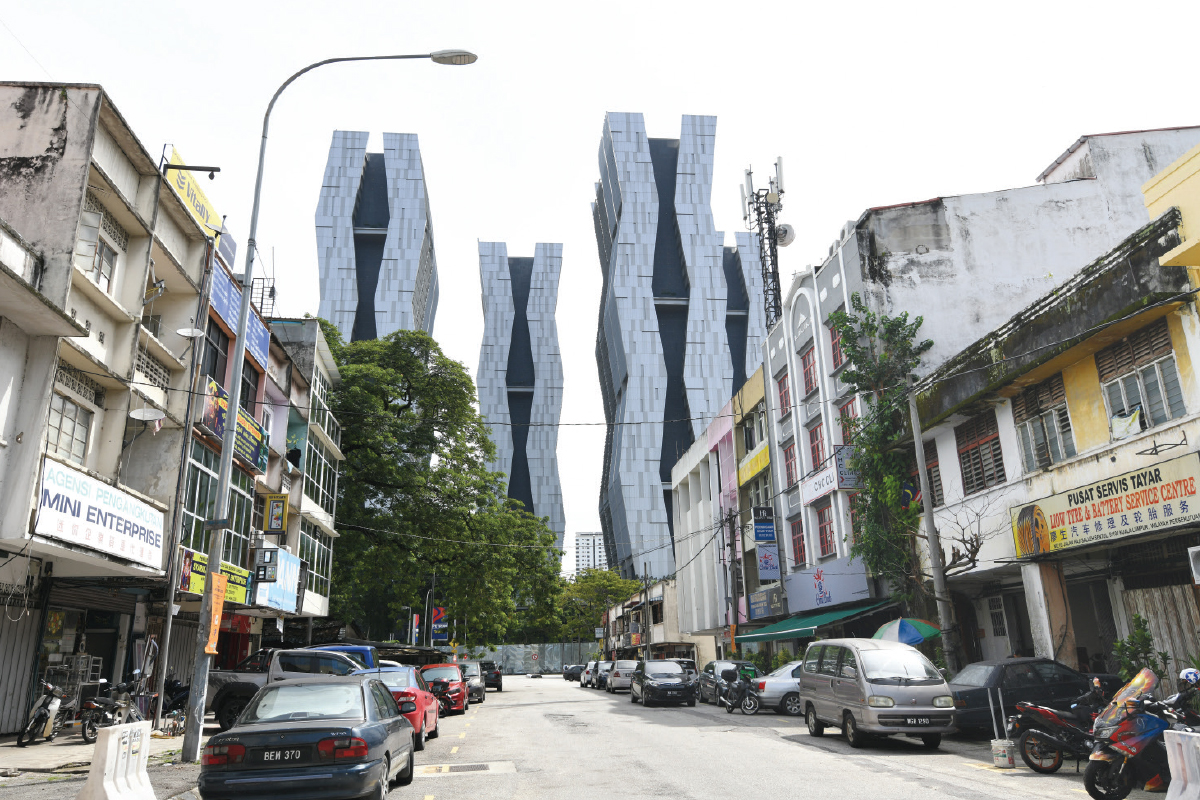 Amid challenges in the market today, the property experts remain positive on the outlook for Sentul’s property market.

“In the immediate to medium term, demand for properties will be affected by the economic slowdown and job insecurity brought about by the Covid-19 pandemic, the ongoing trade war between the US and China and the current political uncertainties locally. In the long term, however, the prospects for Sentul are definitely bright in view of its strategic location close to the city centre, availability of public transport, a good road network and the uplift of overall living conditions and its image over the past 25 years,” says Tang.

Fundamentally, says Wong, Sentul ticks all the boxes in terms of its central location and proximity to the city centre, the improvements to its connectivity and transport infrastructure, affordable prices (generally below RM500 psf) and regeneration, with new developments featuring modern and attractive designs. “All these will translate into increased demand and the accompanying price appreciation,” he notes.

Vetri similarly thinks that Sentul will continue to experience a further rejuvenation in the years to come as it has become one of the most sought-after markets, being one of the last locations close to the KL city centre. “Although the property market is adversely affected by the current economy and the unforeseen Covid-19 global pandemic, I believe the recent OPR [overnight policy rate] cuts as well as the economic stimulus packages by the government will start attracting investors and homebuyers to re-engage with the property market,” he says. 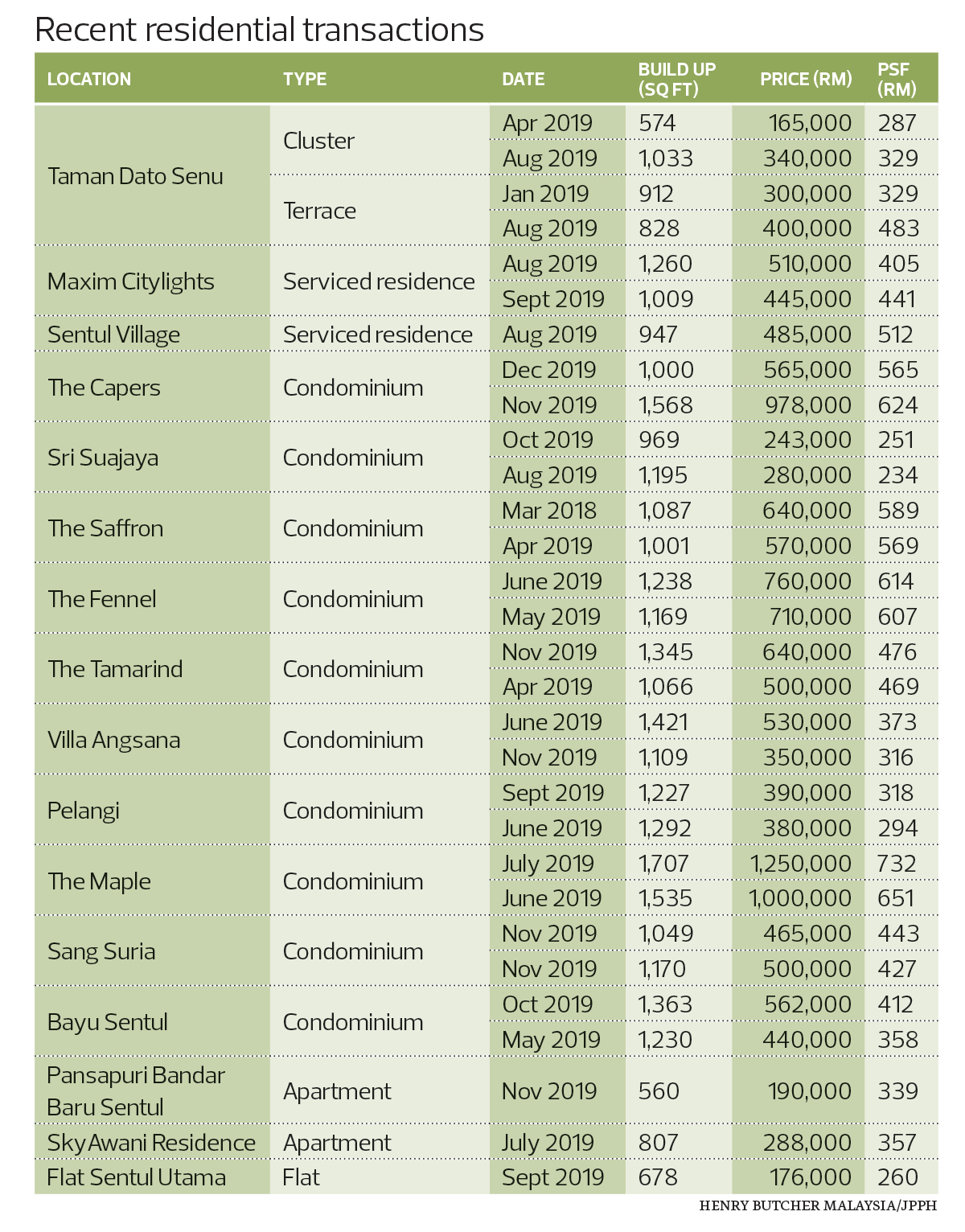 The rapid development of Sentul has brought about an increase in its population and vehicular traffic, leading to traffic congestion, especially along the main access roads in the area, notes Tang. “This issue needs to be looked at and addressed by the relevant authorities. Certain parts of Sentul have also experienced flash floods in the past and it would be good if this issue can be resolved.”

Tang also suggests a proper resettlement scheme for the remaining squatter areas. “A proper resettlement programme should be carried out to resettle these squatters in modern housing with piped water, electricity supply and proper sanitation to enable these areas to be redeveloped and revitalised. Additionally, some of the older low-cost flats in Sentul are in need of proper upkeep and a facelift as this affects the overall image of the area.”

As the trend in the current property market is vertical living, Vetri notes the importance of making such developments eco-friendly. “The global trend is sustainable environments, and developers need to adapt to that.” He adds that features such as a rainwater collection system, electric vehicle charging stations and vertical agriculture are some examples. 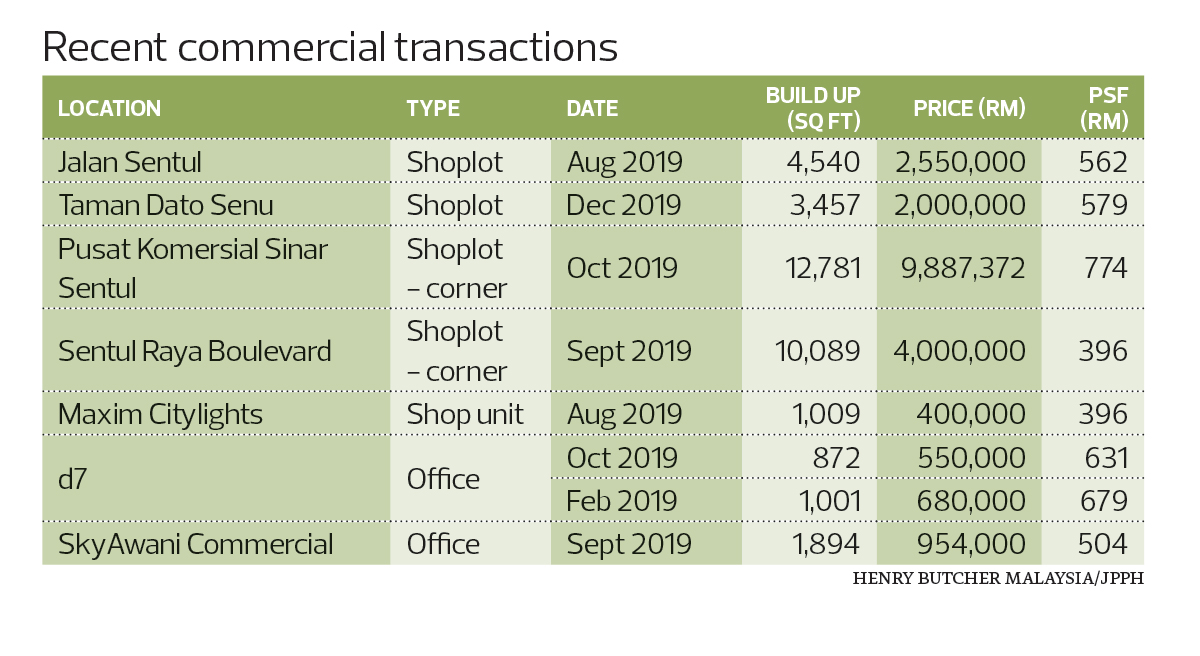 “These advancements and changes will attract more potential buyers and investors as the current generation is moving towards a sustainable future in which energy output could be reduced and the environmental impact can be brought down to manageable levels,” Vetri says.

To further build a more vibrant community in Sentul, Wong suggests the provision of more public open spaces to encourage community-centric activities as well as a neighbourhood commercial centre that will add to the area’s placemaking.

“The klpac is a good example of a catalytic development that has helped lift and transform the area. Perhaps more of such developments focusing on other areas of interest will speed up the redevelopment and transformation of this neighbourhood that is located so close to the city centre,” he says.